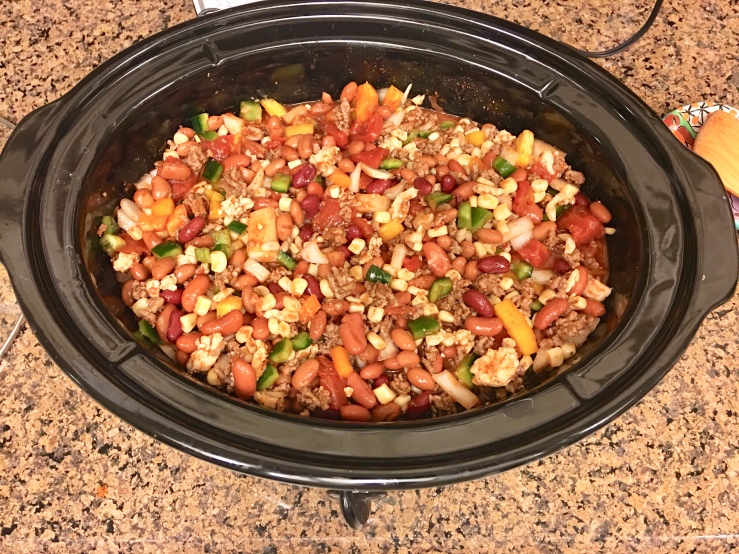 Y’all are in for a treat! I didn’t have to be the cook this week since Justin decided the weather had gotten cool enough for chili. Since this has become a staple of cool/cold weather in our house, I asked him to take pictures and document what he was doing (we really work on measuring and not over seasoning over here!).

A few weeks back, a discussion was started on a favored social media site about chili versus stew, what the difference is, and, of course, the usual banter about the “right” way to do it. One of Justin’s friends at work, Scott Bibbee, makes some fantastic worldly meals, regularly posts photos of his creations (we already have our favorites), and he is one of those people who can tell what the ingredients of something are just by tasting it (so jealous!). I asked if he would write something up about the different ways chili is made around the U.S. Here’s what he said,

Many folks, mostly Yankees, believe strongly that they can add whatever they want to a chili and still call it “chili”. Never mind that “chili” is short for “chili con carne”, that it originated in San Antonio, TX more than 150 years ago, and certainly did not contain frijoles or any other additions when it was invented. The addition of anything other than meat, chiles, and spices is a culinary appropriation of a regional specialty with a long, well documented, and distinct history. Here’s the simple fact – all chili is stew, but not all stew is chili.

There are many reasons that people debase, taint, and dilute this dish. The most reasonable explanation is that they simply don’t know any better. In a day when most folks don’t even know the history of America, much less world history, how could we expect them to know that their stew isn’t chili? More plausibly, though, everyone grew up with their own regionalization of the dish (I’m looking at you, Cincy). I believe that this probably started with people adding ingredients to bulk up their supper.

This was certainly the case for my parents. My Mom and Dad grew up in Akron, OH with potatoes AND beans in their “chili” and my Mom continues this learned behavior even today. My Mom explained that meat was scarce when they were growing up and their parents extended the stew with the addition of potatoes and beans. My grandparents all worked hard, but money was always tight and this makes sense. When you have a lot of mouths to feed and meat is expensive, you bulk up your dish with fillers. And, they love their “chili” with potatoes and beans. At least it is spiced well (for stew).

Just down the road in Cincinnati, OH, they do all sorts of unholy things with their regionalized “chili”. It has the distinct flavor profile of warm spices. Is that… cinnamon? Yes, yes it is. Cinnamon belongs in cinnamon rolls, but not in chili. While improperly spiced, at least it doesn’t have beans unless you ask them to add beans. Props for being pro-choice, Cincy. At least I can willingly decide to make my “chili” a “stew”. I could also choose to have my Cincinnati-style “chili” dumped on a mound of spaghetti. I could also choose to dump that straight into the trash can and get a proper Spaghetti Bolognese.

Speaking of cinnamon and odd pairings, folks in Nebraska evidently eat their stew with… cinnamon rolls. My initial thought was probably the same as any other sane person. I thought, simply, “Eww.” But, perhaps this is okay? Sweet and savory have a place together sometimes. All my single friends seem to enjoy swiping right and enjoying a new experience every now and then. But, Nebraskans also add beans into the mix. See, now you just got Craigslist weird, Nebraska.

Since we are all suffering through the bipartisanship of midterm elections, I say that we should be better and submit to a modest proposal. Let us not be so polarized. Whether you’re wrong about your stew because you grew up that way or because you just don’t know any better, let us call your stew “chili” if we must. But, let’s qualify it with ‘-style’ and add your regional qualifier. As in “Cincinnati-style chili” or “Nebraska-style chili (plus kink)”. What say you, America? 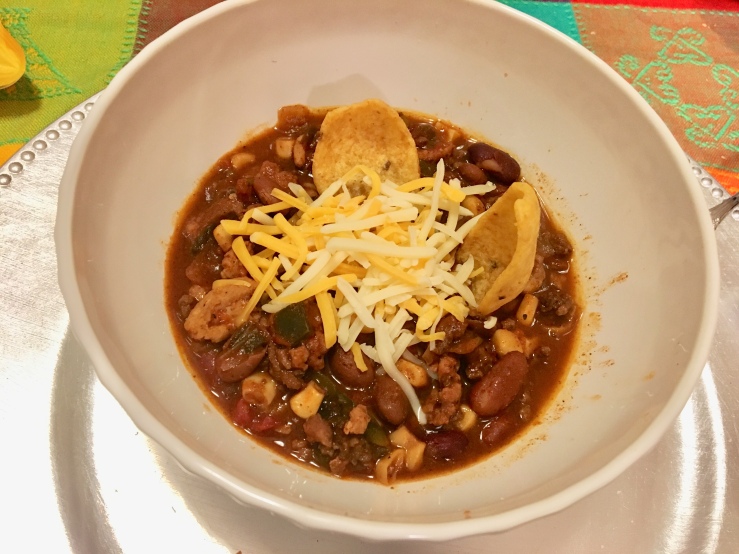 1 can of light kidney beans

The order of steps may assist in reducing the amount of time spent in prepping, but the order is not important as all ingredients will be mixed together.

First, in a skillet on medium-high heat, brown the ground beef. While the beef is browning, add the beans with the juice from cans to the crock pot. Do the same with the diced tomatoes. For the corn, drain the water from the can and add to the crock pot. Dice the onion and add it as well.

Once the beef is done cooking, if needed, drain the grease, then add to the crock pot. Add the ground turkey to the same skillet and cook it. While the turkey is cooking, core and remove the seeds from the peppers, then dice them and add to the pot.

When the ground turkey is done cooking, add it to the crock pot as well. Once all the canned items, peppers, onion, and meat have been added to the crock pot, add the Chugwater Chili Seasoning, Italian seasonings, garlic powder, and cayenne pepper or red pepper flakes.

Carefully mix up the ingredients. Be sure to get to the bottom when mixing to get the beans mixed in with all the other ingredients. Set the crock pot to low and cook for 8 hours.

For serving, top with cheddar cheese, Fritos, or your favorite chili toppings.

View all posts by Lauren